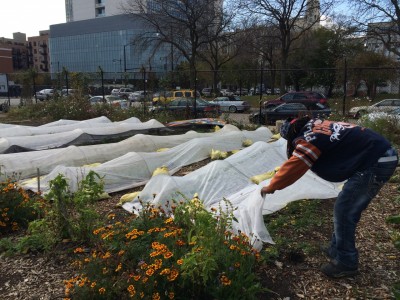 The Chicago Lights Urban Farm sits at the intersection of Chicago and Hudson avenues and at a crossroads for the city’s housing and gentrification struggle.

Located in the Near North Side neighborhood, the farm borders the empty Frances Cabrini rowhouses to the north, the last remains of the Cabrini-Green public housing development. To the south and west lie the affluent River North and Gold Coast districts. All around are shiny new high rises with mixed-income apartments.

While gentrification often involves divisions, anger, fear and displacement, the farm is helping to bring people together; helping long-time residents continue to feel rooted in their community, while also providing a venue for cooperation with newcomers and visitors.

Five years ago, Chicago Lights, a nonprofit arm of Fourth Presbyterian Church, transformed the ministry’s community garden into an urban farm after meetings and focus groups with the Chicago Housing Authority (CHA), aldermen and residents.

“The mission is to empower children, youth and young adults by increasing access to healthy food and economic opportunities,” said Urban Farm director Natasha Holbert. The organization serves neighborhood residents facing the challenges of poverty and violence that have plagued the area.

Besides the location, what makes this urban farm unique is its breadth of projects and participants. There are summer camps and afterschool programs for kids aged five to 13 years old. The Youth Workforce Development program teaches high-school aged adolescents life and job skills. And, in an effort to maintain the community garden roots, there are garden plots for people living within a five-block radius.

While Urban Farm members live in the neighborhood, volunteers come from all over. It is a challenge to reconcile the needs of so many groups and form connections among them, Holbert said. But, the versatility allows for remarkable interaction. Last year, a group of volunteers came from Iraq.

“Some people have coined this ‘Chi-raq,’ so it’s really interesting to have that conversation with youth who were living in this community and youth from Iraq,” Holbert said. “So that is a really fun opportunity to connect in different ways.”

The farm grows more than 100 varieties of fruits and vegetables. They sell the produce at their on-site stand, to the nearby eatery, Farmhouse, and to subscribers who get regular deliveries. They bring the restaurant micro-greens and take their compost for use on the farm.

Malcolm Patterson, a 22-year-old Cabrini native, does the deliveries. He is also an assistant grower and youth educator at the urban farm. He joined the youth corps in 2009 and was officially hired in 2013.

“I don’t know what I’d be doing if I wasn’t working here, so that’s a good thing,” Patterson said. “It just gives me good energy.”

He knows all there is to know about growing the crops and managing the hoop houses and on-site greenhouse. The kids often want to help Patterson with his tasks. “I like inspiring them,” he said.

Despite the farm’s stronghold in the community, it has also been affected as gentrification has changed the residential makeup of the area. Kids living in the rowhouses used to come to the garden, and when parents wanted them home, they would simply call through the fence that separated the lands, Holbert explained.

“We can’t just go door to door or talk to people who are hanging out outside, which was the culture here,” she said. “It’s like getting past doormen because it’s mostly high rises…We have to go through condo associations.”

In September, the CHA and a Cabrini-Green tenant organization reached a settlement in a 2013 lawsuit compelling the CHA to finally rehabilitate the Frances Cabrini rowhouses.

Under the agreement, at least 40 percent of the rowhouses in need of renovation will be reserved for public housing, and another 15 percent will be affordable housing. The CHA also agreed to build more low-income housing in its other renovation projects in the area. The agency originally told residents the rowhouses would remain 100 percent public housing, so many see the long-awaited settlement as bittersweet.

Through all the changes, the Urban Farm remains a haven. Many of the nearby residents who lost their own gardens when they lost their homes at Cabrini now go to the farm.

“It’s really cool to hear stories from people who have lived here for 50 years,” Holbert said. “Then there’s new people to the area that have never gardened before or just want to get their hands dirty, and there’s an opportunity there to bridge some divides.”