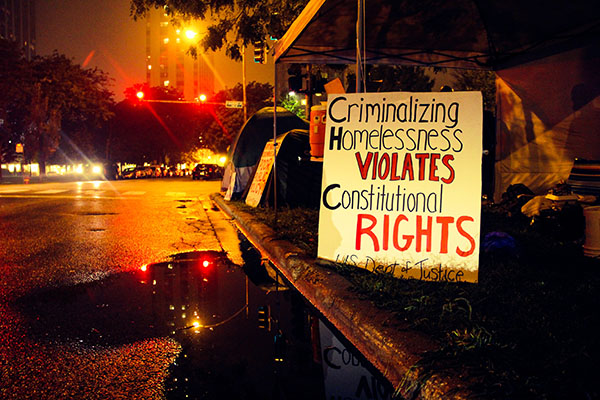 Carol Boyd says she has never been part of a protest before. But she knows well the needs and aspirations of homeless people in Chicago. Boyd is the founder of Humble Hearts, a volunteer-run organization dedicated to feeding and assisting the poor. For more than a decade she has been reaching out to the most vulnerable residents of the city, providing food and supplies and becoming a close friend to many living on the streets.

So in late August, Boyd joined a homeless community in the Uptown neighborhood in their stand-off with local officials and police, who have tried to displace them from  public spaces near North Lake Shore Drive. The conflict kicked off in June, when police cleared homeless people from the area in advance of a concert by the band Mumford & Sons on the lakefront.

Mathias Meier, a journalist from Santiago de Chile and former Medill Social Justice Scholar, chronicled the tent city protest and Boyd’s work. He shows how Boyd and leaders of this close-knit homeless community  calmly explained to police that they were exercising their First Amendment right to peacefully protest, not trespassing on Chicago Park District property or violating any laws.