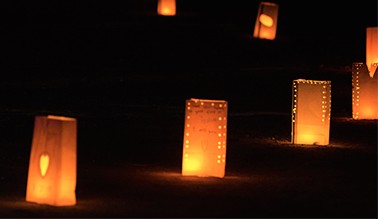 When he learned about his mother’s sudden death, Kevin Doyle figured – just for a moment – that he knew what had happened.

“I thought, ‘Well she’s a nurse, she probably got into a car accident, maybe got hit by a drunk driver on the way home from work,’” Doyle says. “And then when [my dad] said she was shot to death and found in the trunk of our car in our family’s garage…I didn’t know what to say….I went to a school where murder was very uncommon, and I felt alone.”

Today, more than two decades after his mother’s murder, Doyle keeps her memory alive by sharing his story every fall at Comfort Zone Camp, which brings together kids from around the country who have lost an immediate family member to murder.

Nearly 50 kids attended the camp September 11 to 13 this year in Frankfort, Ill. Doyle knew their pain all too well.

“It literally is something you live with your entire life,” he says.

Doyle is now the founder and executive director of the Sheilah A. Doyle Foundation in Oak Brook, Ill., which he created in his mother’s honor. Every summer since 2010, the foundation has partnered with Comfort Zone Camp. Kids attend Comfort Zone Camp in Frankfort for free thanks to the foundation’s yearlong fundraising efforts. The camp serves kids from a variety of backgrounds, including lower-income areas of Chicago and more affluent places. But Doyle says those differences fade quickly, as the common tragic experiences that normally make kids feel isolated actually bring them together.

In fact, kids have started attending year after year, and recruitment has become easy.

“It was really hard the first year to find people,” Doyle says. “It was hard to get 21 kids. But right now…the outreach is happening by itself.”

The camp relies mainly on a partnership with the Cook County Victim Witness unit and word of mouth. Doyle says when he asks people today how they heard about the camp, most responses are similar: People hear through a neighbor, a friend, someone at church, or someone who has experienced a similar tragedy.

Comfort Zone Camp has become a time for kids to have the tough conversations Doyle needed after his mother’s death. Campers are matched with a “Big Buddy” who is chosen depending on the child’s loss, interests and personality. They spend 56 hours in Frankfort sharing their stories and receiving clinical supervision from social workers. They dine together and they honor their loved ones in a memorial service.

“For the kids, we’re trying to instill hope,” Doyle says. “This isn’t the end of the road for you. This isn’t the last chapter of your book.”

But for children who lose a relative to homicide, healing can be a long, winding road.

Last summer alone, more than 150 people were murdered in Chicago. Those victims left loved ones—in many cases, children—to face the seemingly unbearable task of moving forward after a horrific loss.

While Comfort Zone Campers may have experienced similar tragedies, their reactions can differ drastically. Particularly in the case of a violent death, some kids have more to overcome than what we traditionally think of as grief. According to Michelle Cutler, PhD, a child psychologist in Chicago, children whose parents or siblings are murdered might experience traumatic grief—grief that includes symptoms of post-traumatic stress disorder.

“It’s important that when we see these symptoms, we see them as related to the trauma they just experienced rather than a behavioral issue or ADHD,” Cutler explains.

Cutler says there are four main symptoms of PTSD. If she sees these symptoms, she knows to treat the trauma before treating “normative” grief.

“With all these symptoms going on, they can get in the way of the natural grieving process—of being able to have positive memories of the person they loved, express those feelings about it, to grieve and mourn,” Cutler says.

Pete Shrock, national program director for Comfort Zone Camp, vividly remembers learning how we can misinterpret what children try to tell us about their grief. When he was facilitating a group several years ago, he met an eight-year-old girl whose father had died in a car accident three years earlier. “Asking her questions, I realized that she thought she had killed her father,” Shrock says.

On the morning of her father’s death, the girl had cried at the steps of her house because he hadn’t hugged her goodbye. He came back to hug her. She believed if her dad hadn’t done that, he would not have had the fatal accident.

“That informed the decisions she made, what she thought about herself, and the adults around her had no idea that feeling was there,” Shrock says. “There were signs of sadness and signs of fear, but they were misunderstood and diminished.” He emphasizes the importance of asking kids questions to understand how they’re really feeling.

“A lot of times it’s like fishing with kids,” Shrock says. “Just because you cast, don’t expect to get a bite or pull a fish out of the water, but… just because the first cast didn’t work, you don’t pack up everything and go home.”

Adults can easily misinterpret children’s trauma symptoms as mere sadness or behavioral problems. If symptoms of PTSD are never treated, the trauma is not “integrated,” according to Ursula Weide, PhD, a psychologist in the Washington, D.C., area who specializes in bereavement and loss. She says a child may make decisions, good or bad, based on the trauma for the rest of their lives. She says she has seen people go into more altruistic professions to compensate for a childhood loss, while others base decisions on a self-image conditioned by the trauma—feelings of guilt and a lack of self-worth.

Weide says trauma can be integrated when it’s talked about, acknowledged, and kept as an active memory. She has treated a family, for example, who spent five minutes praying by a mother’s picture each morning.
Cutler adds that caregivers can provide routine and fill in the practical things a child might lack after losing a parent or sibling, like someone to tuck them in or make breakfast in the morning. But even with these concrete steps, the process is complicated and differs individually by child.

“Normal grief doesn’t exist for a child,” Weide says. “They do not yet have the coping skills or societal support system. They cannot put what happened in perspective. Society wants to know there is something normal about grief. But there is nothing normal about a traumatic death…we think we control grief, but really, our grief controls us. We learn to manage it.”

Misunderstanding the Bigger Problem
Comfort Zone Camp in Frankfort is one of 32 bereavement programs Shrock runs throughout the country. For each area where he works, his team studies the community to determine what resources are needed beyond bereavement. In Chicago specifically, he says, there is a lot of sibling loss, or younger siblings who might witness a violent event, then fear retaliation, have thoughts of retaliation themselves, or fear testifying before law enforcement. From the outside, Shrock says, these complex issues can be stigmatized or misunderstood.

Even in the most heartbreaking circumstances, according to Cutler, kids are capable of forging ahead.
“Kids are resilient,” she says. “Kids can get through things. Kids can go on and form healthy relationships and reach their goals, particularly if they have supportive caregivers around them.”

Kevin Doyle, now 39, hopes to be an example of that for kids at the camp. For him, healing has become a reality. Though he helps run the camp, even as an adult, he thinks he would get more out of participating in it.

Years after his mother’s passing, he says, the camp has made him feel closer to her and less alone. He doesn’t remember any particular moment of clarity, but with time, his mother’s death has become one part of a rich, longer story.

“I think I’ve gotten to the point where I’ve forgiven the people who have done this to my mom,” Doyle says. “Prior to camp, I don’t think I could have….People make bad decisions in life…If I were to sit down and talk to these people today…I’d say I forgave them.

“And to their parents…I’d tell them to just continue to love their kids.”