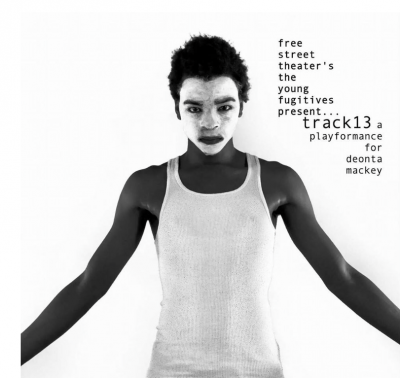 Deonta Mackey had a gun.

That differentiates him from Michael Brown in Ferguson and various other Black men and women whose killings by police have generated widespread outrage and debate over the past year.

Hence focusing on Deonta – killed by a Cook County Sheriff sergeant whom he was trying to rob at a Pullman gas station in February 2014 — as a symbol of the criminalization and marginalization of youth of color is among the numerous reasons that the Young Fugitives’ play “Track 13” is bold, unconventional, striking and provocative.

In a non-linear performance that is visually stunning and emotionally raw, the teenage performers of Young Fugitives act out Deonta’s death throes repeatedly, framed alternately by hip hop, video game sounds, a mother calling her kids to dinner in some Americana scene worlds apart from the urban reality Deonta grew up in.

The brave, chilling performance challenges us to think beyond even the injustices of unarmed African Americans being gunned down by police, but about the larger systemic realities that underpin someone like Deonta ending up facing a law enforcement officer with a gun in his hand.

“They say my son chose that life…he was a good kid, he just had some issues that he was struggling with,” says Deonta’s mother Tonia Stevens in an audio clip played during the performance; which also notes that Deonta’s brain may have been affected by a 2010 meningitis infection.

Track 13 doesn’t simply excuse unlawful or violent behavior because of socioeconomic factors. In director Ricardo Gamboa’s trademark style, the performers are constantly challenging and examining their own biases and preconceived notions.

“N—s have choices and Deonta made a choice to do what he did, notes Young Fugitives co-founder Omari Ferrell. But Omari can afford that insight because “somewhere along the way someone told you that you were special,” charges another Young Fugitive, who is still desperately without any such acknowledgment himself.

The performers lash out against activists who crave the spotlight, and question whether protests make any difference.

Wearing white face makeup, in various sequences the performers become Greek chorus-like symbols of humanity, their faces contorted in frighteningly exaggerated expressions of anger, fear, contempt, despair. This drives home the feeling that Deonta is not separate from the rest of us but rather part of a tortured, struggling society wherein racism, violence, poverty and alienation affect us all.

Track 13 is partly an out-take of the performance Cold Summer that the Young Fugitives first staged last year, moving it to Free Street Theater when the program After School Matters objected to its content. Cold Summer dealt more concretely with Chicago issues including Chicago Public Schools closings and the policies of Mayor Rahm Emanuel. Track 13 is tightly focused on Deonta’s death and what it represents, making it both more specific and more universal.

“These are the stories that don’t get told,” said Eliso Real, who has Young Fugitives tattooed in script on his forearm. “And we don’t only talk about it, we live it.”

Track 13 runs Fridays through October 23 at 7pm at Free Street Theater, in the Pulaski Park Field House at 1419 W. Blackhawk.