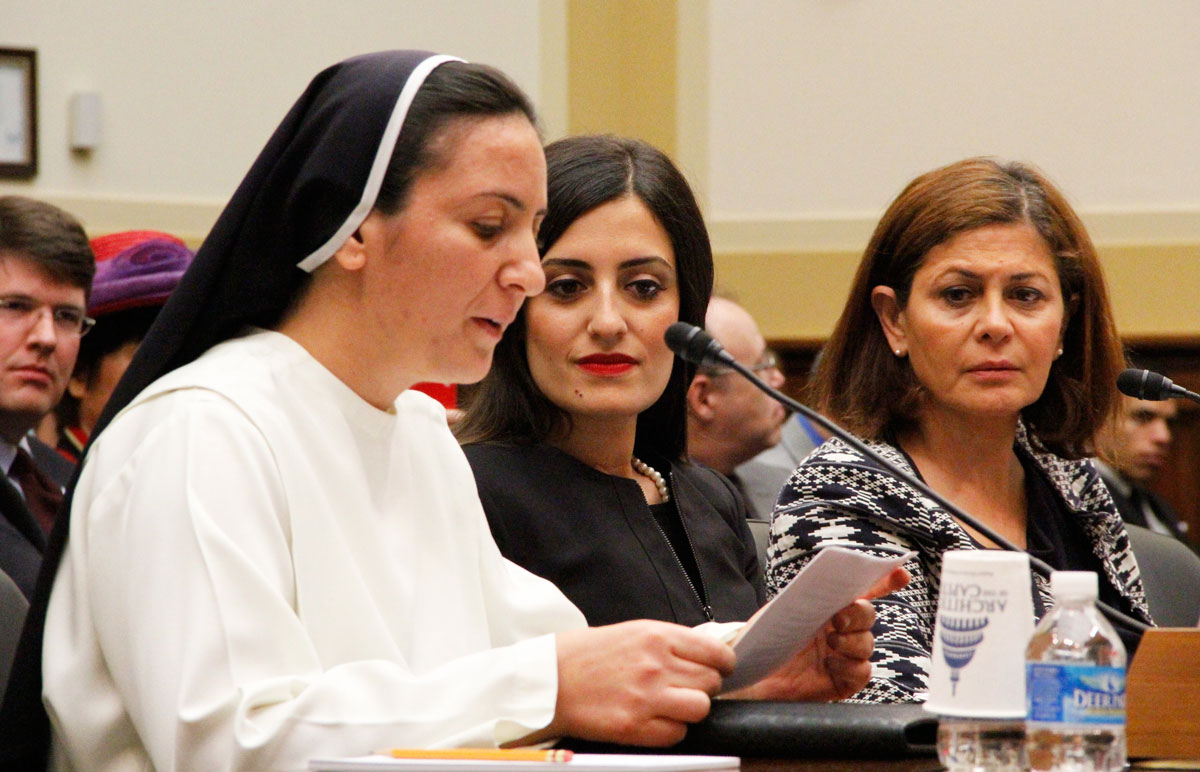 WASHINGTON- She sat somberly, clad in a white habit and a black veil, ruefully pleading with lawmakers to provide relief for religious minorities who remain under the yoke of the so-called Islamic State.

Sister Diana Momeka, a member of the Dominican Sisters of St. Catherine of Siena in Mosul, Iraq, described herself as “but one, small person – a victim myself of ISIS and all of its brutality.

Momeka and other witnesses testified on Capitol Hill last Wednesday, appealing for humanitarian assistance and increased military efforts in regions occupied by persecuted religious minorities in Iraq and Syria.

She advocated on behalf of marginalized minorities who defy the version of Islam espoused by the self-proclaimed Islamic State. They want liberation and help returning to their homes, a coordinated effort to rebuild destroyed roads and buildings and inter-religious dialogue.

ISIS, which emerged in April 2013, has overrun territory in western Iraq and eastern Syria, including Mosul and Tikrit, prompting U.S. air campaigns to help slow the advance. The terrorist group is seeking to control swaths of territory and create an Islamic state.

In early June 2014, ISIS attacked Mosul and moved east taking over Momeka’s nearby hometown of Quraqosh. Non-Muslims were given three choices, she said: convert to Islam, pay a tribute to ISIS or leave their city with only the clothes on their back.

Since then, an estimated 120,000 people have fled north to the Kurdistan region of Iraq, where many have been displaced and left homeless, according to her testimony.

“The mass execution of men, the enslavement of women and children, and the destruction of religious sites is part of the ISIS effort to destroy their communities. To make it as if they never existed,” said Rep. Ed Royce R-Calif., chairman of the Foreign Affairs Committee. “The influx of ISIS extremists has become a plague.”

Members of the committee empathized with Momeka’s testimony. They reflected on past U.S. diplomatic and military initiatives, and insisted that they would advocate for increased support, including humanitarian assistance.

Last year, President Barack Obama authorized U.S. Central Command to work with partner nations to conduct airstrikes in Iraq and Syria after the siege of Mount Sinjar, where ISIS drove out thousands of Yazidi refugee families, leaving some trapped on the mountaintop. The number of Yazidis continues to dwindle as radical Islamists threaten the unstable region, according to United Nations human rights investigators.

“Today it starts with the Yazidis, tomorrow it’s going to be not only the Christians, but every woman who doesn’t fit in with their philosophy,” said Jacqueline Isaac, a witness and vice president of a human rights organization called Roads of Success. “We need to stop the menace that’s going on there. If we can cut the snake at its head, we can diffuse them.”

Isaac recommended supplying provisions to the Peshmerga, the regional Kurdistan military, increasing economic support for other allies in the region, particularly Jordan and Egypt, and providing humanitarian aid for millions of refugees and internally displaced persons in the Iraqi-Kurdistan region.

“In the midst of this darkness—this suffering, we see God is holding us,” Momeka said with a morsel of hope. “Otherwise, we wouldn’t be able to witness our faith that’s increasing day after day.”