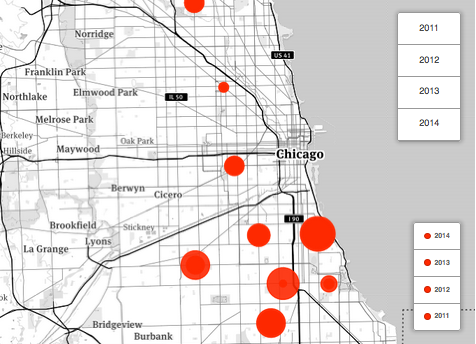 In 2012 the Chicago Department of Public Health closed six of its 12 public mental health clinics, generating massive outcry and the occupation of one clinic. The public clinics have continued to be a prominent issue, including in the 2015 mayoral race.

Clinic clients, advocates and AFSCME Council 31, the union that represents clinic staff, allege that hundreds of clients have “fallen through the cracks” after the clinic closures. The public health department referred clients to either remaining public clinics or other mental health providers – private and county institutions.

Click each point for more information. Regarding staffing, CT refers to Clinical Therapist and AA refers to Administrative Assistant. Map is based on data obtained through Freedom of Information Act requests by the Social Justice News Nexus (SJNN) at the Medill School of Journalism at Northwestern University.

The department declined to provide a breakdown of how many clients were referred to different external providers, citing privacy concerns under the Health Insurance Portability and Accountability Act (HIPAA). The department provided a list of about 50 providers to which clients were referred. The list includes hospitals, nursing homes, neighborhood clinics and non-profit organizations, including Thresholds, Trilogy, HRDI and C-4. However the provider names were incomplete (including “89 Western” and “Pilsen”) and lacked addresses or contact information. That information was not provided upon follow-up requests. The city tracked clients who were sent to external providers for two months after the clinic closures in 2012. The department has not kept further records about those clients. Nor has the city tracked the people who left the city system between the closures and September 2014, a total of 1,365 people.

The department declined to specify to which public clinics clients from closed clinics were referred, citing HIPAA. In interviews, multiple clients of the clinic in Woodlawn, the site of a high-profile occupation, said they were referred to the Englewood and Greater Grand clinics. The Englewood clinic shows a significant increase in client load in January 2013, following the closures. But by January 2014 the client loads at both Englewood and Greater Grand have dropped significantly.

In response to Freedom of Information Act requests the Chicago Department of Public Health also provided data on staffing levels at each clinic since 2011. In January 2012 before the closures, there were 97 total staff at the clinics. As of January 2015 there were 47 total staff. The number of clinical therapists across the system has fallen from 49 in 2012 to 24 in January. The number of psychologists has remained constant at six.