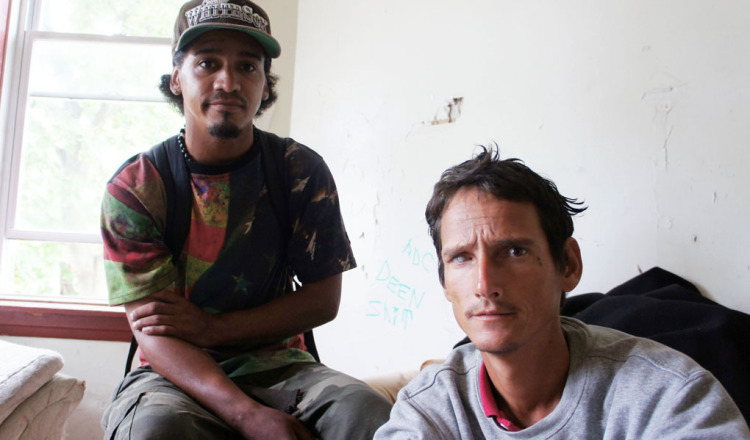 Adriana Cardona-Maguigad completed most of her investigation as a fellow with the Social Justice News Nexus. She also traveled to Puerto Rico with support from the Fund for Investigative Journalism. Bill Healy (SJNN Fellow) and Kari Lydersen (SJNN staff member)  helped with reporting.  This is an excerpt from the original story “Island police and mayors direct heroin addicts to Chicago and other cities with promises of housing and treatment” posted on WBEZ.org on April 10th, 2015.

Over the summer Angel and Manuel lived together in an empty house near 51st and Throop, an area where vacant homes are common. (Adriana Cardona-Maguigad)

It all started about a year ago when I began noticing more homeless men in the Chicago neighborhood where I work. Back of the Yards is a community that faces some of the city’s toughest problems: joblessness, crime, drug use.

Many of these men would be sitting in doorways or shuffling along, many times asking for money.

The men told me they were  from Puerto Rico. They were addicted to heroin and they ended up in Chicago because someone in Puerto Rico drove them to the airport and put them on a plane with a one-way ticket to Chicago.

They were promised a great rehab place, with over-the-top services and plenty of medical staff. One of them is Angel, a short and dark-skinned man. He’s missing most of his top teeth. He said he came to Chicago from Puerto Rico seven years ago for help kicking a heroin addiction.

Click here to explore more photos from the WBEZ story and get a glimpse into the world of addicts traveling from Puerto Rico to Chicago, including their lives on the island.

“Somebody told my family is one rehab in Chicago got nurse, got pool, got medication, when I get here I no see nothing,” he said.

Angel said that when he landed in Chicago he was met at the airport and taken to a place that definitely had no pool. That place didn’t have social workers or doctors. Instead, it was just a rundown building with other addicts trying to stay clean, sleeping on dirty mattresses on the floor, going cold turkey.

Other guys told me something that was hard to believe. They said that it was the police in Puerto Rico who had driven them to the airport and put them on the plane to Chicago.

And the one-way plane ticket? Some of the men said if someone didn’t have the resources to travel, their mayor or some other local official would help buy them a ticket.

I have been a journalist in this neighborhood for five years and I couldn’t believe this was happening here, right outside my door.

I wanted to find more people in this situation. I had seen all these men  on the streets before, selling lotions, batteries or socks around 47th Street.  It turned out, many of them were also from Puerto Rico.

In just a few months, I met 23 Puerto Ricans with similar stories.

Has anyone else heard these stories?

I needed to figure out who else knew about this. I called  homeless organizations, shelters, official drug rehab centers, local aldermen, drug policy experts, but no one had heard about what all these guys were describing to me.

Until I talked to Jose Alvarez. He has been working with injection drug users in Chicago for 11 years and he’d heard the same story I had, from users in Humboldt Park.

“They were thinking they were going to have their own room,  a nice warm place in the winter,” Alvarez said. “A couple of them even said that some of these places had pools.”

Alvarez is from Puerto Rico too. He is a case manager with the Community Outreach Intervention Projects , an HIV and Hepatitis prevention program at the University of Illinois at Chicago.

A few years ago, he was able to get inside one of these residences to do HIV testing.

“It was dark, damp and dirty,” Alvarez said. “Not only that — we saw a couple of mice running across the floor.”

Alvarez knew this was going on, but even he didn’t know how many Puerto Ricans had been sent here.

So after our conversation he spent four days going to shooting galleries and shady corners on the West Side.

“I also went south of the park, around Chicago, around Division all the way west,” he said. “ Do the same with Augusta, you do the same thing with Ohio. Ohio Street? Forget about it. I’m pretty sure the police here in Chicago know all about Ohio Street.”

In all those places, he heard the same story I had, from 93 people in four days.

“And I’m pretty sure that overall in the city, the numbers are a lot higher, because these are only the people that were in the Humboldt Park area and the majority of them wind up in Back of the Yards and Pilsen, Little Village,” he said.

I asked Carlos, one of the first guys I heard the story from, to show me the rehab place where he ended up.

Almost all the men I talked to in Back of the Yards went there too. It’s called Segunda Vida, Second Life.

Carlos said it was on 50th Street and Ashland Avenue, but the place is hard to find. It’s almost like hiding in plain sight.

Finally, I saw a tiny sign in an upstairs window. It was a version of the AA logo.

Segunda Vida is on the second floor  of a rundown gray stone building. It sits between a parking lot and a pawnshop. On a busy street.

The first time I tried to visit, I went through a narrow doorway and up a steep staircase. At the top was an open room. Men were hanging around, smoking cigarettes.

They told me I had to leave. But I went back again and again. Each time I asked to speak to a person in charge. I was repeatedly told to call later or to come back on a different day.

But slowly, I did start to piece it together. These places are informal drug treatment programs that cater to Spanish speakers.

Some Mexican families know about them and send relatives with drug or alcohol problems there. They call themselves 24-hour groups because they’re open around the clock.

Addicts sleep there, eat there and they are not supposed to leave for the first three months.

Drive along parts of Western or Cermak in Chicago and you’ll see the buildings. Most of them have ‘24 hours’ written in Spanish on their sign, next to an AA logo.

I called the headquarters of Alcoholics Anonymous;  a representative there said they have nothing to do with these rehab places. She said AA doesn’t offer treatment, transitional living or social services. Its sole purpose is to offer support for people trying to quit drinking.

I checked on 14 places to see if they had licenses from the state. But they had none.

I checked with Joseph Lokaitis, a public service administrator with DASA, the Division of Alcoholism and Substance Abuse under the Department of Human Services,  but he said he  had no idea that these unofficial treatment groups existed.  “I have not from what you described,”  Lokaitis said. “ I think that’s surprising. That’s not something I have heard of.”

I  went to the city department of planning and development, which gives permits for residential drug treatment centers. They had no records.

I requested information from the Chicago Department of Buildings and there were many violations and complaints connected to the addresses where some of the  treatment groups are housed.

These facilities spring up now and then. They’re run by former addicts and they’re easy to fold up, move and relocate.

As I found out more about these groups, I kept finding more people, men and women, on the street with a similar story. Like Manuel, a tall, skinny man who is using a different name to protect his identity.

He can only see through one eye and often stares vacantly into space.

I asked if he came to Segunda Vida. He said yes, he’d been here for two weeks. He seemed scared. He looked lost, alone and worried about the winter.

He told me what a lot of other guys had — the ‘treatment’ there was mostly a lot of yelling and harsh behavior.

When Manuel walked out, he left his ID and other documents. He said he tried to get them back, but was turned away.

I offered to go with him to Segunda Vida to get his papers. That Saturday afternoon as we walked towards Segunda Vida, my heart was racing. I could tell Manuel was nervous too.

Manuel went up the narrow stairway, I followed closely behind. When the people there saw me coming up with a microphone, they blocked us at the top. Manuel asked for his documents.

A man told us to leave, that we needed to wait outside. More people came up the stairway, surrounding us. Everyone was tense.

I kept telling them that I wouldn’t leave until I get Manuel’s documents: “No first of all, we are accompanying him so that he can get his papers.”

A participant from the group kept insisting that we need to wait outside and that I won’t be able to interview or speak with anyone from Segunda Vida.

“You know why I come here?”  a man from the group said. “Cause I do have problems, that’s why it’s anonymous. That’s why we come here to liberate our pressure. Like, we can’t do that in front of you because you won’t understand us.”

Finally, someone handed Manuel a white envelope with some documents, but they didn’t include his ID.

After another tense wait, someone pushed through the crowd and handed over Manuel’s ID.

Other people were coming up the stairs. We knew we had to leave. Once we walked out, some of the men followed us out and watched us from the sidewalk.

Among the documents were Manuel’s one-way plane ticket and a copy of his medical records, where I found out he is HIV positive.

This is crazy. Sick people are being sent thousands of miles from home to unlicensed drug rehab places in Chicago?

I decided to go to Puerto Rico for some answers…

Adriana Cardona Maguigad’s investigation into unlicensed drug rehab treatment centers and Puerto Ricans coming from the island to Chicago for them sparked extensive response and media coverage. Adriana also published several follow-up pieces herself. Some links are below.