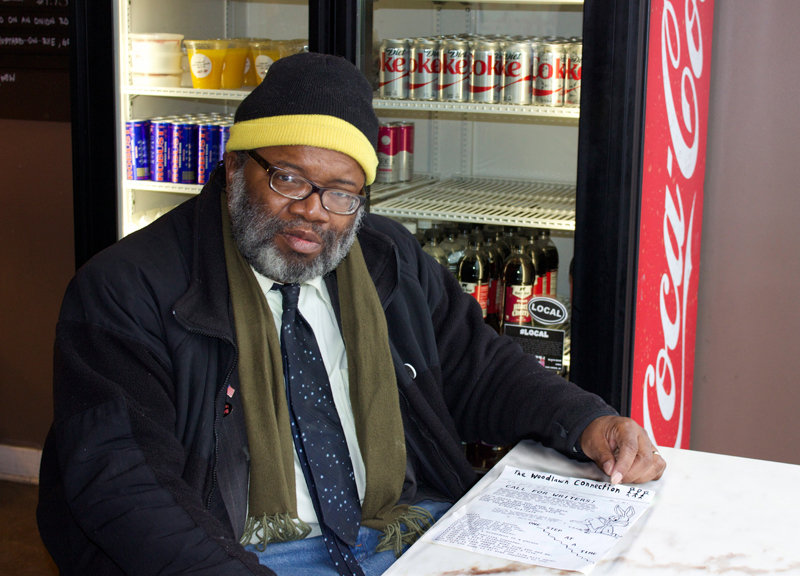 When the city of Chicago closed the Woodlawn Adult Health Center in 2012, the Woodlawn Connection, a monthly newspaper about the mental health clinic that was founded by a patient, folded after publishing 93 issues.

“I wanted to publish 100 issues,” David Nero-Mailey told me during an interview at the Robust Coffee Lounge, across the street from the center. Mailey founded the Woodlawn Connection in August 1997 when he was also a client at the Woodlawn clinic, one of six city-run public mental health clinics that closed in 2012.

“I published the newspaper to have a written record of the center and to let everyone know we were there,” Mailey said.

Daniel Jean, a licensed clinical professional counselor who ran Woodlawn from 1999 until its closing, said the newspaper played an important role.”The paper was a place for patients to express their ideas,” he said. “It empowered them.”

The Woodlawn Connection was a one–to-four-page newspaper that was typed and reproduced on a copy machine Mailey was the paper’s founder and editor. He said Jan Gilmore, a therapist, helped him make sense of his writing.

“He was invaluable,” Mailey said.

Gilmore assisted in the paper’s production and typed the articles submitted by Mailey and others. Fifty copies were printed for distribution to patients, employees, a branch of the Chicago Public Library and anyone who wanted to read it.

The paper published traditional news articles, poetry and editorials. The paper included a regular editorial column titled “Don’t Quit” that urged clinic clients not to give up, despite challenging odds. “Don’t Quit” was produced by Beverly Jackson, another Woodlawn patient.

Mailey also drew Looney Tunes characters like Bugs Bunny and Sylvester the Cat for the paper. Many of the articles focused on Mailey’s personal experiences and on his philosophy.

In the July 28, 1999, edition, the lead story reported on the center’s annual picnic in Jackson Park.

“We were treated to hot dogs, hamburgers and soda pop,” Mailey wrote. “That was just the beginning. I played a little ball. Then I was ready for the main course, which was barbeque chicken, pasta salad, a fruit salad that had watermelon, cantaloupe, strawberry [sic] and some fruit I can’t name.”

Another Woodlawn Connection story told parents, grandparents, aunts and uncles that school was scheduled to open, and they should make sure their children did their homework.

“Set aside a place where they can work…turn off the TV set and the radio. Make sure that you go over their homework with them, even if you don’t understand it …they will,” the story said.

Here is a poem titled “Lost Times” that Mailey wrote about lost relationships:

“Lost or stolen time can never be recovered because time waits for no one. If somehow you find yourself wondering what happened to your life or the people you once knew, you might as well stop searching because while you were temporarily taken from your life as you knew it, whether it was a month, a day, or perhaps a lifetime. Those people you thought you knew you didn’t know anymore. It doesn’t matter who they are or how long you’ve known them. Lost time is lost time, lost relationships or relationships that exist no longer.”

Mailey, a massive man with a thick black and gray beard, was standing outside the coffee shop at a bus stop went I met with him. He brought several copies of the paper and family photo albums in a grocery cart, and greeted me with a warm smile, revealing that one of his big teeth was missing.

When he was a younger and a thinner man, Mailey completed two Chicago marathons. He showed me a certificate proving that he finished the very first Mayor Daley Chicago Marathon on Sept. 25, 1977, in three hours and forty-eight minutes. The race is now called The Bank of America Marathon.

He started writing as a teenager during this time. “I started keeping a journal when I was 13 or 14. I wrote almost every day,” he said after swallowing a bite of a Reuben sandwich.

Unfortunately, Mailey lost his beloved journal soon after high school in a Chicago Police Department van. He had come back to Chicago after a year at Eureka College in Eureka, IL. Miriam, his older sister, called the police to arrest him when she first noticed signs of her brother’s mental illness (later diagnosed by psychiatrists as schizophrenia).

After his arrest, Mailey was homeless for 10 years. He has been in and out of psychiatric hospitals more than 10 times. He now lives in an apartment with his wife near the building that once was the Woodlawn Adult Mental Health Center; it still houses a county primary care clinic. The photo above was taken outside the Woodlawn center.

Mailey still goes there to relax even though the mental health clinic is long gone. “It is my sanctuary,” he said.

Mailey graduated from Kennedy-King College in 2009 and he is now a junior at Chicago State University, studying art. He still keeps a diary.