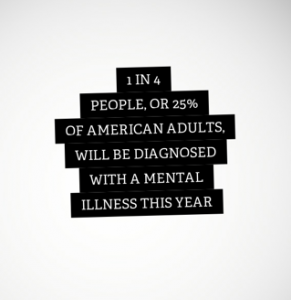 In mid-December, three other SJNN fellows and I attended a training workshop hosted by the Poynter Institute on covering suicide and mental health. The experience was thought-provoking. All the journalists gathered there believed that mental illness is an important issue that doesn’t get enough coverage. All had either dealt with a mental health issue themselves or had loved ones who were affected. But the bulk of our three days together were actually spent listening to suicide prevention experts explain all the ways in which we shouldn’t talk about suicide.

At the training, we were encouraged to write about it more, but in a sensitive manner. We were told to eschew grim details, focus on attempt survivors rather than those who died, to stop reporting the erroneous idea that there is a suicide epidemic in the country…

It seemed that we were being asked to join the advocates in their prevention efforts, to somehow, through our reporting, deliver a message of hope for people struggling with suicidal thoughts. We were warned of “suicide contagion,” which can result from too-detailed reports of the means by which people take their own lives.

Should journalists be responsible for helping prevent suicide? There was disagreement in the room. I don’t yet know how to answer that question for myself. However, I have thought quite a bit about what kind of reporting on suicide and mental illness might actually be in the public interest.

A recent example of reporting on suicide that the advocates at Poynter’s training found particularly egregious was the account of Robin Williams’ death. Many wire services and other news outlets quoted directly from the coroner’s report, which described William’s death in detail. I had to agree it was lurid. It is visually powerful to read how exactly someone killed himself, or tried to. In the context of a 500-word wire service story this image can be gratuitous, color with no context. We know nothing more about what drove Williams to suicide by picturing those final moments as they were reported by the AP and other outlets. 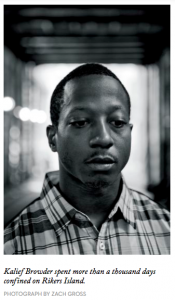 However, I came to the opposite conclusion while reading a recent New Yorker piece. In Jennifer Gonnerman’s profile of Kalief Browder, who spent more than three years at Rikers on robbery charges waiting for his day in court, vivid descriptions of his suicide attempts add something to the story. Might that something be more important than the potential harm these descriptions could do for someone out there trying to find a way to die? I would argue that through these scenes the reader can gain a deeper understanding of Browder’s mental state. By the time we get to those moments in the story, there is hardly a question of why he would resort to suicide. We have delved so fully inside the grim world in which he is ensnared that these decisions become intelligible.

In the beginning of the story Browder appears to be a well-adjusted teen living a normal high school life. He lands in Rikers after someone accuses him of stealing a backpack. As concentric circles of injustice close in on him, his natural vulnerabilities and risk factors combine cataclysmically with the desperation of present circumstances. We learn how someone’s world can totally collapse.

While the coverage of Williams’ death pandered to the public’s fascination with the macabre in mental illness (perhaps unintentionally), I think Gonnerman’s piece and others like it actually further our understanding of mental health and illness. Perhaps learning a little about how it feels to lose control of one’s mind is an inoculation against stigma. At their best these longer, in-depth, person-centered stories give us intimate entry points into the lives of others, exposing the fragility of mental balance for people who resemble us in so many ways.

Statistically, one in four of us will be in those shoes at some point in our lives.