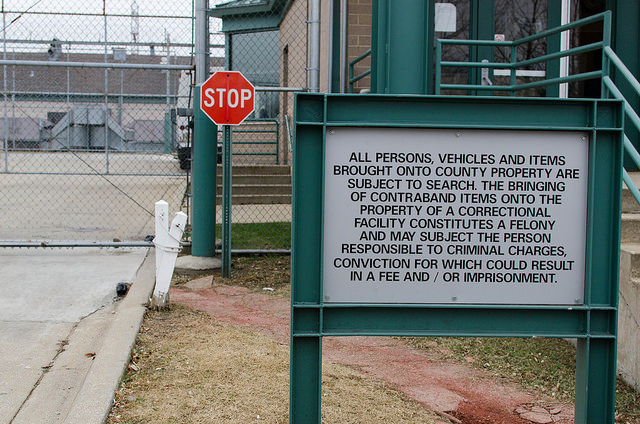 Imagine a teenage African American boy. He is 18 years old, a star basketball athlete from the West Side being scouted by colleges offering scholarships, including DePaul University.

But one day he makes a mistake.

He is charged with burglary after allegedly trying to steal from a Lou Malnati’s Pizzeria. He was caught in the manager’s office. The safe had been opened but the money was all there.

He pleads guilty on the advice of his attorney and is sentenced to the Cook County Jail boot camp, an alternative to incarceration.  But due to a mental health condition, it turns out he is not eligible for the boot camp program. Instead, he waits in limbo at the Cook County jail for about five months while his lawyers go back and forth with the state’s attorney’s office, arguing that he only pleaded guilty thinking he would be accepted in the boot camp program.

The state’s attorney doesn’t agree to vacate the plea, and while the legal battle continues, the young black man stays behind bars without a clear resolution on his case. His mental illness gets worse, and he begins to engage in self-harming behaviors like swallowing objects including a screw and a razor blade.

That’s one of the stories that Cara Smith, executive director of the Cook County Jail, shared with a group of journalists who visited her facility on Friday Dec. 12.

“I sit there and I think to myself, ‘Lou Malnati’s is not out one red cent, and this boy with tremendous talent, his life is essentially ruined.’ And that’s a hard reality to preside over,” Smith said.

The visit was part a fellowship program with the Social Justice News Nexus at the Medill School of Journalism at Northwestern University, where a group of graduate students and professional journalists are focused on highlighting and investigating issues of mental health and incarceration. The Cook County Jail is the largest in the country. It sits on the corner of California Avenue and 27th Street, just east of Little Village, a predominantly Mexican immigrant community.  The jail has a daily average population of 9,000 inmates, with about 95 percent of its population awaiting trial.

Cook County Sheriff Tom Dart, Smith and other jail officials say they are seeing increasing numbers of mentally ill people in the jail, people who should be getting services for mental illness and drug or alcohol addiction rather than incarceration. Part of the problem, Smith explained, is that the departments involved in the criminal justice system each have to follow their own rules and practices, and others can act with more leniency or flexibility toward offenders than the jail can.

“Everybody along the line from the law enforcement agency that makes the decision to the judge that sets the bond, they all have discretions,” Smith said. “But here we have none. We have to open our doors and take whomever they give us. Regardless if they are severely mentally ill, pregnant, sick, on chemotherapy, whatever their case may be.”

Smith said about 500 inmates are there for retail theft of under $300. Many hundreds more are there for other “crimes of survival,” as she calls offenses that involve someone just trying to get a place to sleep or something to eat. Criminal trespassing and prostitution are other examples.

“For a judge to issue a $50,000 bond for someone who is stealing $100 of liquor, you might as well set a million-dollar bond. They are never getting out. You are essentially sentencing them to the jail at pre-trial,” Smith said.

In theft cases, the “victim” would often be a retail store like Wal-Mart or Walgreens, which do not lose a single cent since the person is caught before they actually get away with the merchandise. But it costs on average $143 a day to keep someone incarcerated, Smith said. And that doesn’t include the cost of care for someone suffering from a mental illness, needing special attention like medication, doctors and extra security. For them, it could cost twice as much.

As resources for mental health services in the community dry up, the population of individuals with mental illnesses winding up in jail increases. The challenge is getting elected officials to care, said Ben Breit, the strategic communications director for the Cook County Jail. “Everyone says I care about mental health, we need to fund this, this is so important, but the budgets speak for themselves. They keep getting cut.”

Every day, the county jail does mental health screening of all the new inmates before they go to bond court. That’s part of an effort to divert mentally ill individuals from becoming detainees.

“Surprisingly people were very forthcoming,” about their illnesses, Smith said.

The idea, she explained, was to share that information with the public defender who would also share that with the court in hopes of finding other alternatives to incarceration, like electronic monitoring or a more therapeutic environment. But the plan hasn’t worked out as jail officials hoped.

“In reality the public defender was hesitant to share that information with the bond court because they felt they’d be more at risk of putting someone out that was mentally ill,” Smith said.

Now the practice is used to identify at an early stage those who need mental health medical services within the jail. That area also known as intake has a somewhat manic environment, Breit said before taking the group of journalists into the room.

“These guys are about to go to bond court and have no idea what bond they are going to get,” he said. “They could be walking out with an ankle bracelet going home, continue working, be with their family or they can get a bond that they can’t afford to pay and they are going to be here for a day, a week, a month, a year, they do not know.”

Elli Petacque Montgomery is deputy director of the Office of Mental Health Policy and Advocacy for the sheriff’s office. She has about 20 years of experience working at mental health facilities across the state.

“Before I came here, I worked in two psychiatric hospitals, the largest in Cook County,” she said. “Unfortunately a lot of the clients that I am seeing from the hospital sector…we are seeing them here.”

She handles the intake process for new inmates who come in each day. Men, mostly black, are waiting on benches to be called and some are waiting inside caged bull pens. In that same area, there is another room where the inmates meet with their public defenders.

Along with her team, Montgomery interviews everyone before they go to bond court to get an idea of who is mentally ill, who is on medication, who needs medical care, or who may have committed a crime while in a psychotic state.

If the judge sets a bond that a detainee can’t afford, they will stay in jail and go through another intake process including a mug shot and a medical screening including more mental health

“It’s like an assembly line,” Breit said. They also go through an extended mental health check up with Cermak Hospital, the jail’s own medical facility.

In August, the Cook County Jail opened the Mental Health Transition Center, where highly functioning mentally ill inmates have programming to work on their social, cognitive and problem solving skills. Cook County jail psychologist Dr. Denna Williams said the transition center is meant to “give them those tools necessary so that they don’t come back, as well as to give them some vocational skills training [and] education.”

The program currently has 60 participants who come for several hours of programming a day. But the plan is to accommodate 200 males with a live-in division at the transition center. Participants must have bonds set at less than $100,000.

While the transition center has been a bright spot, Breit said the inherent challenge of addressing mental health problems at the jail is that no one knows when inmates will be discharged. Inmates could be at the Cook County Jail for a matter of hours, days, weeks or months. Some inmates go to state prison, some are released on probation and others, Smith said, can spend months in jail only to see their charges dropped suddenly.

“We are a really important part of a very broken system in Cook County,” Smith said. “It takes way too long to get cases to trial. That’s a place where we need real change, but it takes everyone buying in.”