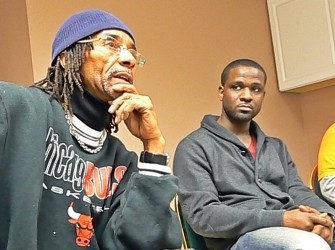 SJNN Fellow (Cycle 1) LaRisa Lynch published this two-part series for Austin Weekly News.  The first story introduces readers to Delvertis Duke, who struggled with addiction for several decades, and the potential impact of the Affordable Care Act in supporting low-income people accessing drug treatment services.  The second story describes the complexities of how the move to a managed care system for Medicaid in Illinois interacts with the expansion of the Affordable Care Act on a federal level by President Obama.

Hope for substance abusers under Obamacare

Duke can say that and mean it.

He’s been off drugs for three years after being addicted to heroin and cocaine for three decades. Duke battled drug addiction since the age of 22, when his experiments with marijuana and alcohol morphed into heroin and cocaine. Finally clean, Duke is married and started a home rehab business called God’s Skillful Hands.

“I could put up cabinets, cut in the sink,” Duke said proudly. “I could put it all in —     ceramic floors, bathrooms. I could do everything by scratch.”

A former member of the Undertaker Vice Lords gang, Duke has come a long way from his days of using, then selling, drugs on the streets to support his habit. He recognizes that his redemption came from an unlikely place: jail. Duke cycled in and out of jail and prison six times, with his first stint being in the federal penitentiary in Oxford, Wisconsin in 1991.

Things changed two decades later. In March 2010, Duke was caught with a bag of heroin that got him 37 days in Cook County Jail. This time Duke had had enough. Detoxing in jail wasn’t the best option, but it seemed like the only way to get clean.

“It feels like I got the flu more than the flu,” he recalled. “I feel like I’m finna die. Stomach turning, upside down. Then when you get 15 to 20 days in, you start feeling better. Then you ask God to help you out.”

He bargained with God that if he got through it, his hustling days would be over. Jail for Duke saved him.

“When I got out, I didn’t look back,” he said. “My focus is living a normal productive life.”

Duke’s path to sobriety follows that of many low-income people who cycle in and out of incarceration because of drug addiction.

In Cook County jail, 75 percent of arrestees routinely test positive for illicit substances when they enter, according to Treatment Alternatives for Safe Communities, Inc. (TASC), which provides case management for people leaving jail. According to 2012 data from Substance Abuse and Mental Health Services Administration (SAMHSA), 40 to 51 percent of people in drug treatment for marijuana, methamphetamine and PCP were referred through the criminal justice system. Only 7 percent of all drug treatment referrals came from a healthcare provider.

“What does that say about how we’re handling substance use disorders in our society?” asked Daphne Baille, TASC’s director of communications. “We’re saying that when it becomes a criminal justice problem, that’s when we are addressing it. We are not addressing it when it’s showing up in our doctor’s offices.”

The Affordable Care Act greatly expands access to health services, including substance abuse and mental health treatment. That’s especially true for low-income, single childless individuals living in states that expanded their Medicaid programs under the law. Illinois is one of 27 states to do so.

More than 622,000 Illinoisans signed up for health care under the law. And, of that, approximately 405,000 people enrolled in the state’s expanded Medicaid program. But as Obamacare’s open enrollment period begins, many treatment providers say hurdles still exist that could impact those needing care. Treatment facilities could see a significant impact.

Sally Thoren, executive director of Gateway Foundation Chicago West Treatment Center in North Lawndale, is hopeful the law will result in more access to treatment for many people.

“The best part about the ACA is the fact that it recognizes and requires insurers to cover mental health and substance abuse,” Thoren said. “That’s a huge accomplishment [since] that wasn’t always the case.”

Medicaid expansion under Obamacare gives people the ability to seek care, but it does not necessarily guarantee access to care.

For example, Gateway offers several outpatient, as well as residential treatment services, city and statewide for adults and youth. A federal rule limits the size of such adult treatment programs to 16 beds.

Gateway’s North Lawndale site at 3828 W. Taylor has 100 beds — 16 of which are adult Medicaid beds and another 18 are for youth. The remaining beds are for private insurance patients. While more people are eligible for those Medicaid beds under Obamacare, it does not increase the number of licensed and certified Medicaid treatment providers, or the number of Medicaid beds in treatment facilities.

Thoren said that for every bed in her facility, there are three to five people waiting for admission.

Stagnant Medicaid reimbursement rates also impact capacity, said Eric Foster, chief operating officer for the Springfield-based Illinois Alcoholism and Drug Dependence Association (IADDA). Addiction treatment providers have been reimbursed at the same rate since 2006, even though the cost to provide care has gone up, Foster said.

Medicaid reimburses group and individual counseling at $22 and $15 per hour respectively, on average. Obamacare does not change that, though the state has proposed a possible 3-percent rate increase for addiction services in its FY2015 budget.

The state’s move to a managed care system for its Medicaid program is raising concerns among health care providers looking to enroll substance addicts in treatment programs via the Affordable Care Act, i.e. Obamacare.

In 2011, Illinois passed a law mandating that half of its Medicaid recipients be covered by managed care plans by 2015.

Insurers, he explained, will push for fewer days in residential treatment and more outpatient care. But outpatient treatment is not adequate for many long-time drug users who are often low-income, homeless or on bad terms with their family, Jackson said.

Those individuals need more intensive case management in a sober environment to cope with stressors that could cause a relapse, Jackson said.

“Being in an outpatient program, they don’t have very much chance of ever getting a foothold into being drug free,” Jackson said.

Loretto Hospital, 645 S. Central, is the only West Side detox facility west of Western Avenue. The hospital offers a 28-day residential treatment program that provides case management, housing placement and addiction education. Haggie said the hospital has a holistic approach to treatment that goes beyond detox.

That care, she said, could be compromised if insurers skimp on treatment    just paying for detox services and not for extended aftercare.

For the past decade, U.S. Rep. Danny Davis (7th) has been leading a movement for “treatment on demand” – the idea that anyone who wants and needs substance abuse treatment should be able to get it promptly, regardless of their ability to pay.

“The idea being that the best time to service substance abuse users and individuals with mental health problems is when they decide that now is the time to get treatment,” Davis said. “If they go seeking treatment and there is no treatment available for them, they may change their minds and never come back.”

Delvertis Duke’s plight — finding jail as his best option for treatment after years of drug abuse — shows how badly treatment-on-demand is needed. Davis hopes the Affordable Care Act is a move in that direction. The congressman also notes the high number of Americans who have used or become addicted to an illicit substance.

The National Survey of Drug Use and Health estimated that in 2012, 22.2 million people aged 12 or older, or 8.5 percent of Americans, were classified as having a substance dependence or abuse problem. Additionally, 20.6 million people needing treatment for drug and alcohol use but did not receive it, according to the agency.

Davis said many congressmen recognized this fact in deciding to include substance abuse treatment under Obamacare.

“You couldn’t say you were doing any type of comprehensive health care unless you were making some attempt to deal effectively with the issues of substance abuse,” according to the congressman.

The referendum, he noted, raised awareness among state legislators about the importance of keeping funding levels for drug and mental health treatment on par with demand. But while the ballot initiative received more than a million votes, it did little to maintain funding for drug and mental health treatment. Since 2007, funding for addiction treatment from the state’s general revenue fund dropped from $111 million to $65 million for the 2014 budget.

Daphne Baille of Treatment Alternatives for Safe Communities, Inc. sees the health care law as a move toward treatment on demand.

“This is a wonderful affirmation of what the voters asked for,” said Baille, the organization’s director of communications. “It shows that the policies being enacted are indeed responsive.”

Her optimism is cautious, however. Greater access to treatment, she stressed, does not necessarily mean those who are in the throes of drug addiction will avail themselves of it.

“What the Affordable Care Act does is it is an avenue to pay for treatment,” Baille said. “[ACA] reduces one of the burdens that have kept people from treatment.”

Still, state officials contend that expanded Medicaid has had tremendous impact on recipients by providing mental health coverage, substance abuse treatment and prescriptions benefits. Illinois Department of Human Services spokesperson Januari Smith said these individuals are “full participants in our healthcare system,” where they were disenfranchised before.

But in terms of access to substance abuse treatment, Smith said the agency has set up a care monitoring system. This, she explained, will continually review the type of services needed for each client, including the need for admission to residential treatment programs and outpatient services.

“We intend to make sure that every client has access to the right treatment, for the right amount of time, from the right provider,” Smith said. “The review is to ensure that the client is making progress and is receiving the appropriate level of care.”

Ultimately, experts say, treatment capacity will still have to be expanded. Also, reimbursement rates must be increased, as well as managed care concerns addressed, according top experts. Those and other issues will have to be worked out to approach true treatment on demand, experts insist.