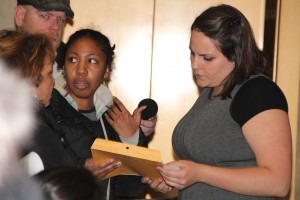 “I don’t like to be cutting my medication in half,” said a 38-year-old woman who is a consumer of mental health services at Chicago’s North River public mental health clinic, as she stood with a group of fellow consumers and supporters outside Mayor Rahm Emanuel’s office on November 12. “When the symptoms come up, it’s a real dilemma.”

The woman, who declined to give her name, is among a number of mental health consumers who are afraid they will be left without medication, since the city has not hired a psychiatrist to replace the clinic’s staff psychiatrist who retired in July.

“We really, really need a psychiatrist,” the woman said, shaking her head.

Only psychiatrists can prescribe medication. Clients say the talk therapy and other services available at the public clinic are invaluable, but they feel they have nowhere else to go to get medication. As their supplies run out, many are feeling desperate.

That’s why the group of consumers and supporters of the North River clinic visited the mayor’s office and the Chicago Department of Public Health this week. They tried to request a meeting with and deliver a letter to public health commissioner Dr. Bechara Choucair. He was not in the office, an aide said, and the group was asked to leave and to call or send an email later. A police officer responded to disperse them from the ground floor food court of the DePaul Center, which houses the health department on the second floor.

“They told us to shoot them an email, that’s not a solution, that’s not a health solution,” said Becky Brasfield, a leader of the North River Consumer Council. “We’re in a crisis situation.”

After leaving the health department, the group visited City Hall, where Brasfield (pictured, left) gave a letter to a representative of Mayor Emanuel.

North River’s former psychiatrist, Dr. Sylvia Santos, gave the department and clients about two months’ notice before retiring. The consumers council sent the department a letter on June 30 voicing their concerns about filling her position. On July 22 and then again in October, they sent letters asking for more details about the city’s recruitment efforts and also asking the city to consider increasing the pay and benefits they were offering and to consider hiring a psychiatric nurse if no doctors were available.

“We got form letters in response,” said Mike Snedeker, executive director of Coalition to Save Our Mental Health Clinics, an advocacy group formed in 1991. The consumers handed out copies of Choucair’s polite but vague letters sent in response to their queries. “That’s insulting to people’s intelligence. We want answers.”

Gloria Centeno leads a bilingual peer group at the North River clinic, drawing on the skills she used as a professional case manager before she began suffering severe depression. Centeno said Spanish-speaking and undocumented immigrants who attend the clinic are especially concerned, as they are uninsured and feel they lack other options for care.

“They’re cutting their medication in half, but if they do that they’ll have a relapse and be hospitalized,” said Centeno. She noted that they could get medication at the public county hospital, but there is a long waiting list for an appointment there, especially for Spanish-speakers who require a translator.

Yvonne Laverdure, a retired secretary, has attended the North River clinic since the city closed the Northwest public mental health clinic, along with five other clinics, in 2012. “It’s like my family here,” she said.

“The idea of Cook County is scary to me,” she said. “I don’t even know where it is.”

She thinks she will end up going to a nearby hospital – an option which is typically more expensive and otherwise less beneficial than getting care at a clinic.

During a city council committee hearing on the proposed budget last month, Choucair answered questions from aldermen about the mental health clinic situation. He said the department has been trying to hire psychiatrists, with the goal of hiring six, one for each clinic. But in the face of a national shortage of psychiatrists, he said, there have been no applicants. The city recently raised the pay being offered from $87 to $96 an hour, Choucair told aldermen, in hopes of attracting applicants.

“The mayor says we have a world class city, and we can’t get one psychiatrist at a mental health center?” asked Snedeker.

Brasfield said afterwards that she feels the public health department and mayor’s office “aren’t taking our concerns seriously, it was really just trying to get us out.”

“If that’s how you’re treating your mental health consumers,” she said, “That’s a serious problem.”

The Social Justice News Nexus will be covering the mental health care crisis in Chicago on an ongoing basis. Stay tuned for more coverage shortly of the North River consumers’ struggle, and other stories to come.