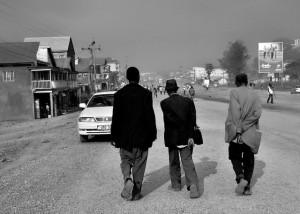 In Uganda, residents have survived decades of brutal civil war; abduction, rape and violence carried out as part of the conflict; time in squalid camps for internally displaced people and finally trying to rebuild lives in communities that have been socially and economically devastated.

Not surprisingly, a high percentage of Ugandan residents suffer mental health disorders, including PTSD and depression, caused or exacerbated by all they have been through.

The links between violence or war and mental illness are well-documented and not surprising. But especially in places wracked by such trauma and need, it’s common to overlook the ongoing mental health impacts of poverty.

The Peter C. Alderman Foundation was launched by Elizabeth and Stephen Alderman in the name of their 25-year-old son killed in the September 11 attacks. The Aldermans saw first-hand the serious mental health impacts of that terrorist attack. As they brainstormed for ways to memorialize their son, their thoughts turned to locales worldwide where people also suffer trauma from terrorism and war, but have few mental health resources.

Pavia noted that – for example – Sierra Leone and Liberia have only one retired psychiatrist and two psychiatrists, respectively, nationwide. These countries also have precious few mid-level health professionals with mental health training. Those countries are among the poorest in the world and are at the epicenter of the Ebola epidemic, which is sure to have long-lasting mental health consequences. Pavia quoted statistics that, worldwide, more than three quarters of people with serious mental health issues never get treatment.

PCAF works to establish culturally appropriate treatment and train indigenous local health workers in post-conflict situations around the globe. PCAF notes that one sixth of the world’s population have been directly impacted by armed conflict, terrorism, sexual violence or genocide. And epidemics of PTSD and depression have resulted from those situations, making many people in already impoverished and vulnerable conditions unable to work, attend school or care for their families. Pavia cited a study in India showing that people with mental health problems earn an average of three weeks’ less salary per year. And she noted that research shows mothers’ mental health problems directly affect their babies.

“There’s a terrible cycle of causation between poverty and mental health,” Pavia said. “Billions of philanthropic dollars are spent on things like vaccines, seed programs and microfinance. But if someone doesn’t care if they live or die, they’re not going to vaccinate their kids, they’re not going to cultivate their land. This really is a development issue. If you start to think about treating mental health, you start to think about poverty reduction.”

PCAF runs clinics in Uganda, Cambodia and Kenya and opened the first  mental health wellness center in Liberia. It has also provided training and services in Haiti and Rwanda and convenes annual conferences for African mental health professionals. Pavia stressed the importance of training local providers. “People’s expressions of mental distress are very very different from community to community,” she said. “We don’t believe in helicoptering in.”

PCAF’s clinics in Uganda have carried out studies on impacts and approaches to treating depression, including in individuals infected with HIV. A paper co-authored by Stephen Alderman, a medical doctor, showed the positive impact of weekly group psychotherapeutic sessions. For example, just eight of these sessions greatly relieved the depression symptoms of a 49-year-old HIV positive mother at PCAF’s clinic to the point she could resume making money to support her family.

Hearing about the PCAF’s work and the vast mental health impacts of conflict, terror and also grinding poverty in developing countries inevitably sparked me to draw parallels to Chicago’s mental health care situation. Chicago and Uganda are extremely different places and situations needless to say, and the socioeconomic conditions and level of trauma suffered by residents differs greatly.

But Chicagoans also experience armed violence on a regular basis, especially in South and West side neighborhoods where shootings are common and resources are lacking. Meanwhile thousands of Chicagoans live in chronic poverty and instability that doubtless affects their mental health and creates a vicious cycle wherein the mental health impacts make it even harder for them to get work or education to improve their situations.

Meanwhile as the Peter C. Alderman Foundation stresses the importance of culturally appropriate care offered by local residents, and of group psychotherapy, I can’t help but think of the situation with Chicago’s public mental health clinics. In describing why the public clinics that closed were so important to them – even when city officials point them to care elsewhere – many Chicago consumers describe the sense of community and the group dynamic. They also describe close relationships with therapists – in settings and locations that many considered more culturally relevant than the alternatives they’ve been offered.

Chicago’s mental health challenges are many. But learning about the healing of a former child soldier in Uganda, for example – coming from a situation more extreme and with less resources than most Chicagoans — offers hope that adequate and appropriate treatment options in Chicago can indeed help our residents heal from the violence and trauma they have experienced.