Meet the inaugural class of the Social Justice News Nexus, an experimental program launched in January by Northwestern’s Medill School of Journalism, Media, Integrated Marketing Communications with a two-year grant from the McCormick Foundation’s Journalism Program. The social justice reporting fellowship is an effort to harness the talents of community reporters and Medill faculty and grad students to report collectively on critical issues facing Chicago neighborhoods.

[IMAGE: SJNN fellow Joshua Conner interviews Ruben Castaneda, long-time Washington Post crime reporter who recently published a memoir about his own struggle with crack and the drug’s effect on Washington.]

They include a Palestinian film maker, a Puerto Rican actor, a Venezuelan broadcast reporter, a Colombian community journalist and the long-time editor of the journal written by Chicago public housing residents. Others are reporters from Catalyst-Chicago, Austin Weekly News, Univision and WBEZ. They produce in all media forms and collectively have won an impressive array of Lisagors, Emmies and other awards for their work.

“Chicago’s news ecosystem is vibrant though fragmented and the ability of in-depth series or exposés to set the agenda for engagement and action is frustratingly elusive,” says Medill Interim Associate Dean Jack Doppelt. “The strategy behind the News Nexus is to marshal both journalistic and community-based resources to serve as catalytic agents to address social issues.

This first round includes an eager team of 14 community reporters and eight Medill grad students. They’ll report independently during the next six months and will come together frequently for skill shares, coaching, tutorials and editing. When the stories are ready to go, they’ll be published by the reporters’ respective websites and media outlets as well as on a special platform Medill is designing for the initiative. In addition, the team is exploring other avenues for public discussion of stories and perhaps even some surprises such as live events that will bring the stories into the communities they involve. Then a second round will begin with a new, related topic.
Leading the initiative at Medill are Doppelt, who stepped down from his post as Medill interim associate dean to be principal investigator on this project, associate professor Louise Kiernan as student fellowship director, Kari Lydersen as community fellowship director and Winnie Wang as News Nexus coordinator. 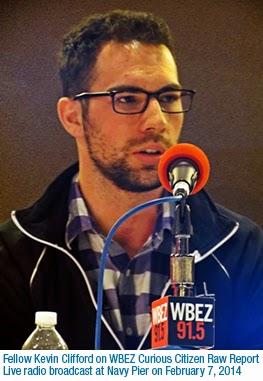 The 22 Fellows came together in late February for a two-day symposium on the topic of the program’s first round: “Rethinking the War on Drugs,” presented by the Seventh Circuit Bar Association Foundation and co-sponsored by NU’s School of Law and the Harvard Club of Chicago. The high-level symposium featured local and national experts on drug policy, and delved into the impact of mandatory sentencing, the social and economic costs of incarceration, the hemispheric drug trade and lively debate over the consequences of legalization of marijuana. Afterwards, Fellows gathered for a workshop on what they had heard and learned.

Community Fellow Adriana Cardona Maguigad, editor of The Gate, is reporting on the effectiveness of local rehab centers, active drug users in the Back of the Yards neighborhood and the illegal drug market in the New City area. “This Fellowship will help me bring to light untold stories of local residents who have been victims of an illegal industry that continues to have a strong presence in our communities,” she said.

Another Community Fellow, Sam Vega of the Spanish-language daily Hoy, is excited about being part of a network of reporters but also the skills he’ll be honing. “Being part of this Fellowship will allow me to continue my growth as a multimedia producer as I tap new skills like data analysis and investigative reporting,” he said.
“What surprised me was how many of our fellowship applicants had been directly affected by the first issue we are examining: drug abuse,” said Kiernan. Among the student fellows are a young man who worked as a juvenile probation officer in Los Angeles, a young woman whose family was torn apart by her father’s cocaine addiction and another whose interest in social issues was sparked by what she encountered teaching on a reservation. 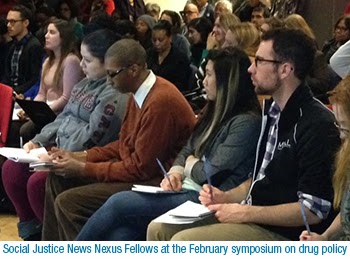 How does the Medill faculty leadership team view the term ‘social justice’ within a reporting context?
Not a problem, says Doppelt. “We decided to be unabashedly affirmative about our investment in ‘social justice journalism,” he says. Doppelt defines the term as “a concerted effort to drive collective engagement and impact on issues that matter in the lives of Chicago’s communities”.
“It is advocacy to the extent that we advocate for a constructive and sustained airing of those issues,” he said.

Lydersen agreed: “I’ve always been drawn to stories with a strong social justice angle both because they are so important and because they are often truly great stories,” she said. “They feature complex elements, strong and inspiring characters and information or wrongdoing that begs to be uncovered or exposed.”
Plus, Doppelt says, when he originally polled grad students on a new program built around ‘urban affairs’ reporting, there was no interest. But when the exact same program was described as a ‘social justice reporting fellowship,’ “every hand in the room went up.”

Stay tuned for some provocative reporting.

The Community Fellows Are:

The Medill Grad Student Fellows are: